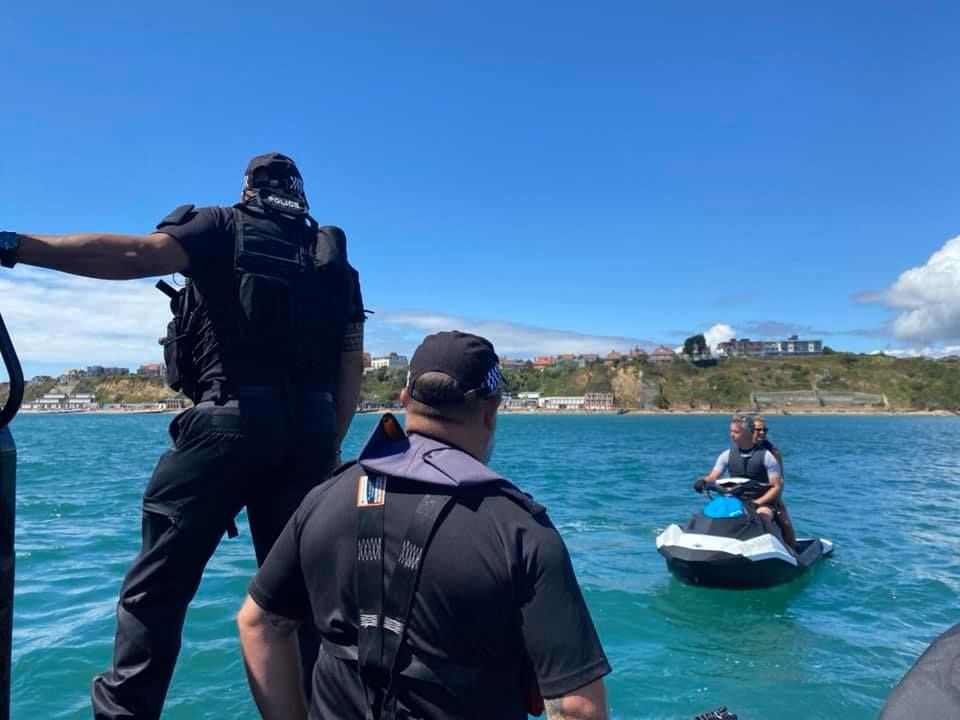 Poole Harbour Commissioners, Dorset Police and partner agencies got together for a day of action on land and sea along Dorset’s coastline on Saturday 1 August 2020, following increasing concerns about speeding watercraft. 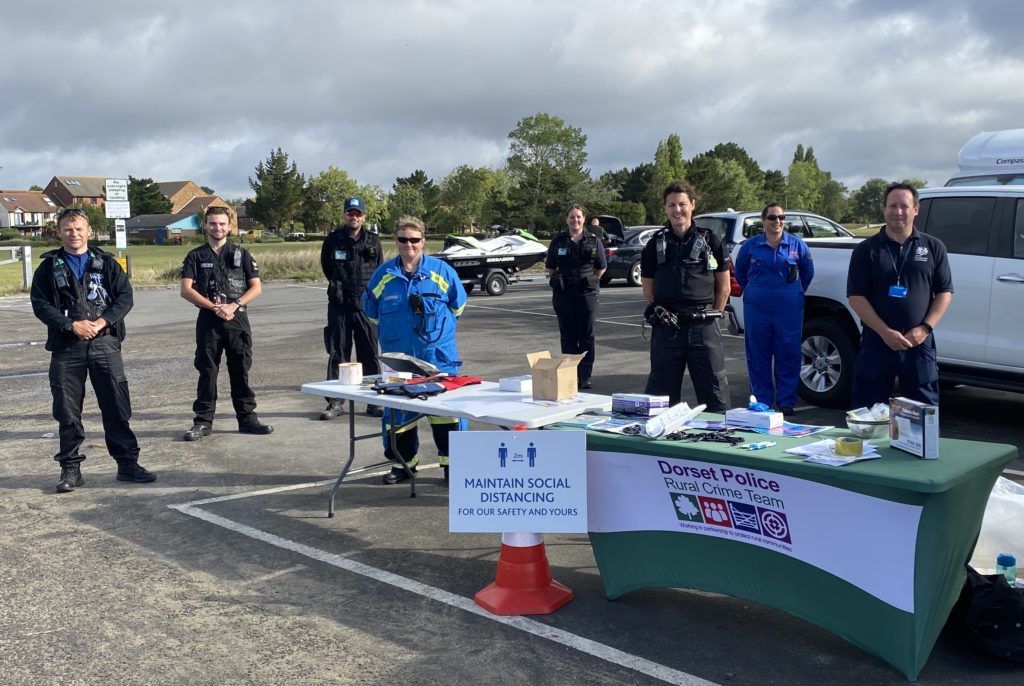 Police joined officers from Poole Harbour Commissioners, HM Coastguard, Bournemouth, Christchurch and Poole Council, Southern Inshore Fisheries and Conservation Authority (IFCA) and the Marine Management Organisation to speak to hundreds of users of popular launch sites such as Baiter Park in Poole. The key message was safety and the risk to life, in response to the growing number of complaints about speeding jet skiers and other watercraft.

Hundreds of people in the marine community were spoken to and many welcomed the increased presence due to concerns that a few users are making it dangerous for everyone else. Since the end of lockdown, Poole Harbour Commissioners (PHC) have seen a rise in the number of complaints regarding the inappropriate behaviour of Personal Water Craft (PWC) users.

Captain Brian Murphy, Harbour Master for PHC, said: “We’re delighted to be working with SIFCA and the other partner agencies involved to deter the dangerous use of PWCs in Poole Harbour. Our intention is to educate PWC users of their duty of care and raise awareness of the byelaws that are in place to protect them, our wildlife, and other harbour users. In light of the complaints, we have recently reissued a local notice to mariners that details several designated areas within Poole Harbour that allow the segregation of certain waterborne activities, including PWCs.”

“Since its introduction in 1995, the Harbour Zoning Scheme has proved very successful in managing the various recreational activities within Poole Harbour. These zones enable water sport enthusiasts to enjoy their sport in an area that causes minimal disturbance to wildlife and other harbour users, therefore reducing risk and improving safety. Most users restrict their activities to the relevant zones and abide by the relevant codes of conduct, but unfortunately, we still see occasions where a minority are in breach of the byelaws and their reckless and unlawful behaviour ends in prosecution.”

As well as the important safety messages regarding the risks to human life, police were also advising the marine community on the best ways to prevent the theft of watercraft. Dorset Police have recently recovered stolen jet skis which were being transported in a trailer.

PC Claire Dinsdale, Dorset Police’s Deputy Lead for Wildlife Crime, along with officers from the Southern Inshore Fisheries and Conservation Authority and Marine Management Organisation were also running their awareness campaign regarding illegal fishing and harm caused to marine wildlife as part of the operation.

PC Dinsdale explained: “It’s not just humans at risk from the reckless use of watercraft but our protected marine wildlife too. We’ve recently had incidents of jet skiers approaching a dolphin in Weymouth Bay and fatalities of wildlife in other areas. While we understand how exciting it is to see marine mammals visit these waters, we must not be tempted to get close or start to follow them. Intentional or reckless disturbance of whales, dolphins and the basking shark is a criminal offence, punishable by up to six months imprisonment and/or an unlimited fine. You may think your presence does them no harm, but this is far from the case. Getting too close can impact their feeding, sleeping and other crucial behaviours. Please stay at least 300m away, keep engines off, or keep to a max of six knots, do not follow or approach from behind or the front but enjoy from a distance.”

“Another issue is people taking parts of washed up deceased marine mammals such as teeth. It is also illegal to possess or trade in such items. Deceased species are sent for post mortem as part of the Cetacean Strandings Investigation Programme so it is important people report but do not touch. I would ask the public to spread these messages and report any wildlife crime in progress to police on 999, including the disturbance of marine wildlife.”

The Marine Management Organisation has produced a clear poster outlining how to avoid causing harm to dolphins. 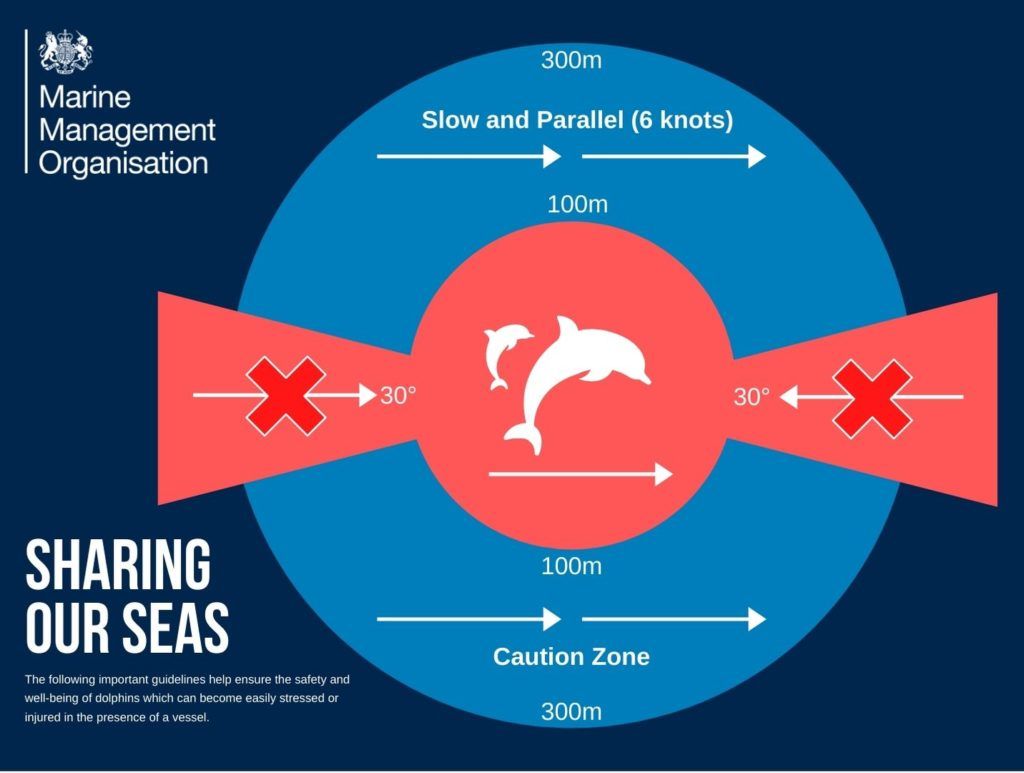 An MMO spokesperson said: “Disturbance by boats and personal watercraft often causes stress and harm to seals, dolphins, porpoises and whales, affecting their ability to feed, breed or nurture their young. If you observe any disturbance by boats or personal watercraft, please report immediately to police. Please also report via email to conservation@marinemanagement.org.uk or call 0300 123 1032.”

As well as speaking to hundreds of people on the shoreline, officers conducted patrols on the water from Christchurch Harbour to Swanage. Many fishing vessels were spoken to and advice given.

Robert Clark, Chief Officer of the Southern Inshore Fisheries and Conservation Authority, said: “Our inshore fisheries and conservation officers operate a fleet of patrol vessels and work at sea on and on land to ensure compliance with fisheries regulations to protect coastal fisheries and the important network of marine protected areas off of our coast. We work closely with our partner agencies to deliver a joined up approach to compliance. Anyone suspecting illegal fishing activity should please it to enquiries@southern-ifca.gov.uk or call 01202 721373.”

Anyone with information about individuals committing marine crime can report in confidence anonymously to Dorset Police or via CrimeStoppers online or 0800 555 111.