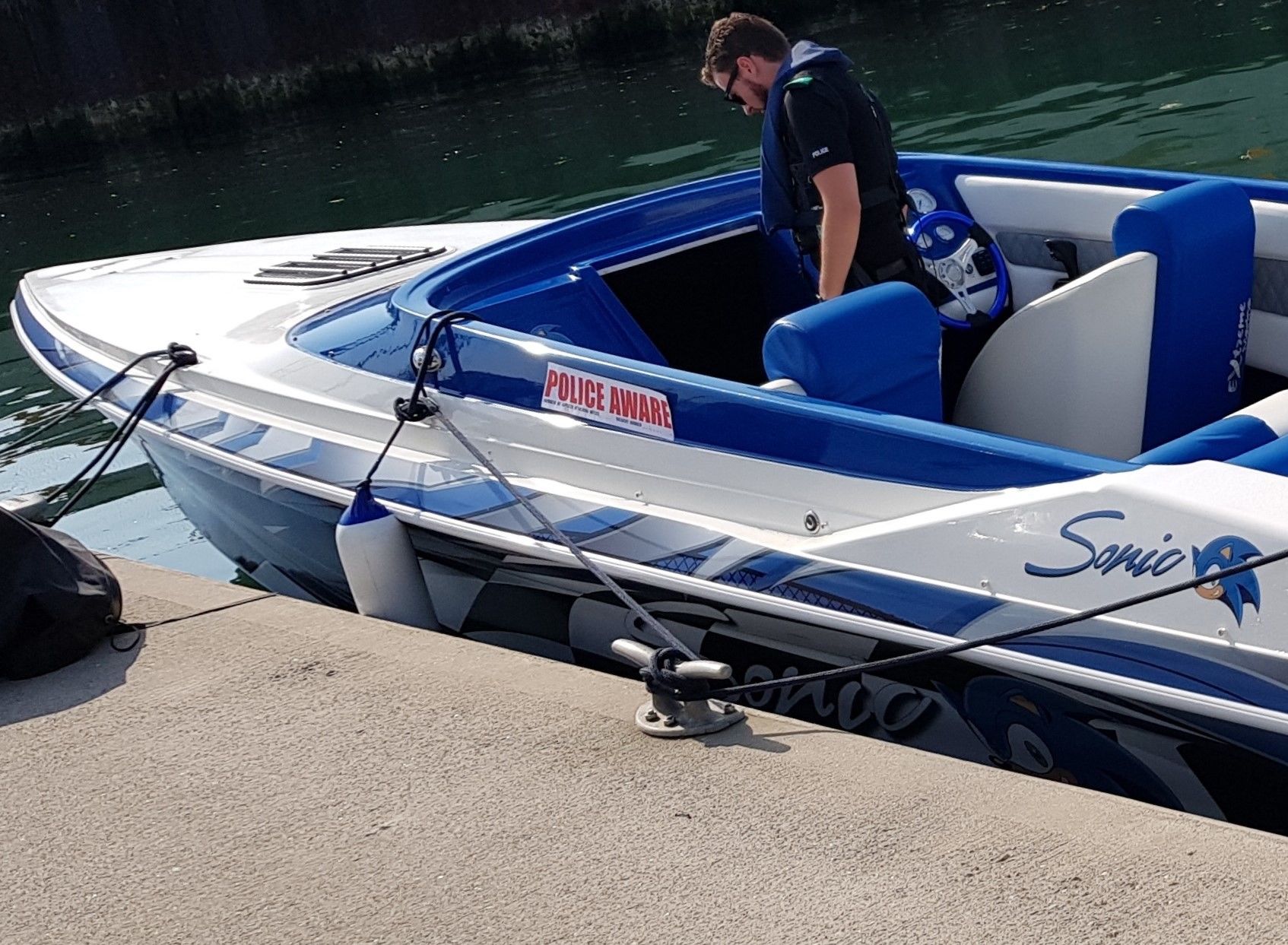 Posted at 14:02h in September by Tracy

The Marine Policing Team and Poole Harbour Commissioners are appealing for witnesses to come forward after complaints were received of a motor vessel travelling at excessive speed, causing danger to other water users in the River Frome in Wareham and in Poole Harbour.

At around 6.40pm, Saturday 29 August 2020, a blue and white motor vessel named ‘Sonic’ was seen at the Quayside in Wareham beside the Old Granary Public House. The boat was reported to have left the Quayside in the direction of Poole Harbour at speed causing an excessive wash. The boat was then reportedly seen at Ridge Wharf where it took the left hand bend still at speed, and was later seen crossing Poole Harbour and into the Swash Channel.

The speed limit on the River Frome downstream of Wareham is four knots, and is overseen by the Environment Agency. Owing to the level of danger posed by the reported actions of the vessel, Dorset Marine Policing Team have commenced a parallel investigation into navigation offences alongside Poole Harbour Commissioners, who have primary jurisdiction in the harbour.

The vessel in question has been seized to allow officers to undertake further enquires.

Poole Harbour Master Captain Brian Murphy, said: “Since the easement of COVID-19 restrictions we have seen an increase in reported byelaw infringements within Poole Harbour which has led to increased patrols (including working jointly with the Marine Policing Team and other authorities) resulting in a number of court summons being issued with prosecutions pending. Fortunately these are very much relating to a minority of harbour users.

“We have local and national legislation in place, relating to excessive speed and dangerous navigation, which will be enforced for the protection of harbour users in accordance with our Enforcement Policy.

“We would appeal to anyone who has witnessed inappropriate behaviour of persons on board the motor vessel ‘Sonic’ or dangerous navigation of the same vessel to come forward to assist with this joint investigation.

“Poole Harbour Commissioners have and will continue to work closely with harbour users to maintain navigational safety within Poole Harbour for the safety and enjoyment of all.”

Marine Policing Team Co-ordinator Roan Doyle, of Dorset Police, said: “In recent weeks, across the UK, we have seen a number of very serious marine collisions and lives lost on our waters and our thoughts go out to all those involved and their families. Our initial enquiries into this incident suggest that the vessel is alleged to have been travelling in excess of ten times the speed limit in place on the River Frome, which is frequented by paddleboarders, kayakers and swimmers, in addition to recreational and commercial mariners.

“Speed limits on our waterways are in place to protect life, property and the environment, and the manner in which the vessel is reported to have been used posed a very real risk of serious injury to water users.

“I would like to appeal to any members of the public who may have CCTV footage along the river, or have taken mobile phone footage of the vessel, who we have not already contacted, to get in get in touch

“The Marine Policing Team will continue to work with our partner agencies to promote marine safety, prevent and detect marine crime, and keep Dorset’s waters safe.”

Anyone with information regarding the incident on the river is asked to contact Dorset Police at www.dorset.police.uk, via email 101@dorset.pnn.police.uk, quoting occurrence number 55200130031. Alternatively, contact Crimestoppers anonymously on 0800 555111 or via www.crimestoppers-uk.org.

Anybody with information regarding the actions within Poole Harbour are asked to contact Poole Harbour Commissioners on 01202 440 230 or via the website at www.phc.co.uk quoting incident 473.